This kit is an attempt to make a kit for the SCA combat safety rule set, with an attempt to get close to the armour used at the historical event "The Combat of the Thirty" on the 26th March 1351. 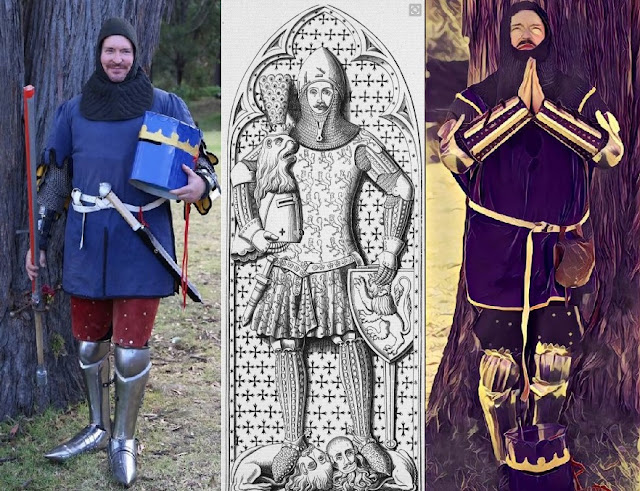 Incorrect great helm shape - I did not have the time or funds to order a new helm. This was hand made before I had my workshop set up with dishing stumps, stake or anvil. Straight shaped using a hammer and a pipe. Correct curves and piecing pattern was known, but tools unavailable. Plan to replace helm with a purchased bascinet and will make a faceplate.

Mail coif instead of skullcap helm - I was able to order a reasonably priced riveted mail coif, I did not have time, resources or tools to execute a steel skullcap with mail, in order to place the greathelm over that.

Undersized coat of plates - I am wearing a fabric garment with riveted plates between the shirt and arming coat, rather than between the mail and surcoat.

Incorrect shape of elbows - I believe mine are too modern.
Fore arm and upper arm splints of different pattern - While my forearms and uppers are of rivet and stay construction, they are do not resemble the pattern in the effigy

Leg layers - I have attached the leg layer poorly. I have researched different methods and I have an excellent plan for my next COTT, which will likely be 2019 due to scheduling conflicts.

Solid legs and sabatons - are acceptable for the period, they simply do not match my effigy, however...

Sabatons too long - they are too long for my feet (and I suspect any feet) due to the uniformed construction.

Modern shoes under sabatons - I have suffered multiple slip injuries with period shoes and cannot sustain another one.


LINK: Back to the ADP Guide